Pele is considered by many to be the greatest football player of all time, the only one to win three World Cups.

An emotional Brazil began paying its final respects Monday to football legend Pele with a wake at the stadium where he first took the world’s breath away with his dazzling skill.

Hundreds of fans lined up Monday morning to file through the Vila Belmiro, home to Pele’s longtime club, Santos, where the coffin bearing the remains of “O Rei” (The King) was displayed in the centre of the field.

Pele, a three-time World Cup winner widely considered the greatest footballer of all time, died Thursday at the age of 82 after a long battle with cancer. 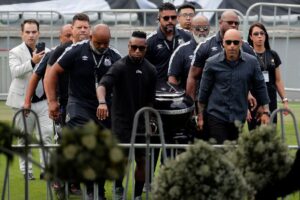 Carlos Mota and his 12-year-old son Bernardo travelled more than 500km (300 miles) from Rio de Janeiro to Santos, a southeastern port city in Sao Paulo state, to pay tribute to their late hero.

“My whole childhood was influenced by what Pele did for Brazil, by his World Cup wins. He was a national idol,” Mota, 59, told AFP.

“I never saw Pele play, but I’ve seen the videos. He’s the greatest player who ever walked the Earth,” said Bernardo.