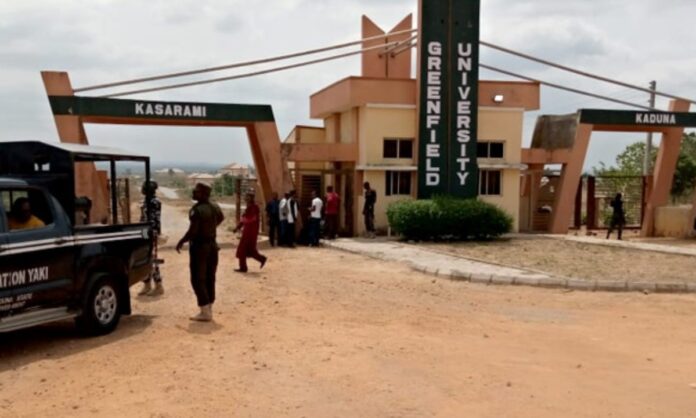 The management of Greenfield University in Kaduna State has called on the Nigerian government and people of goodwill to come to their aid concerning the kidnap of the university students.

The university in a statement signed by its Registrar, Bashir Muhammad, lamented that efforts made to secure the release of the students had not yielded any result, adding that the situation is overwhelming.

Part of the statement read: “We are all aware of the incident at Greenfield University on Tuesday 20th April 2021 by 8:15 pm where some staff and students were abducted.

“Efforts have been made to secure the release of these staff and students, which have not yielded the desired results.

“Even so, very sad news reaching us is that three of the students were killed and their bodies were found near the University.

“There were two female and one male casualties. Further, a ransom of 800 million Naira has been demanded from our abducted staff and students.

“We are at this point calling on the government and people of goodwill who can be of assistance to come to our aid as the situation is becoming overwhelming.

“The management of Greenfield University appreciates the concerns of the government of Kaduna State, led by Malam Nasir el-Rufai and commends steps taken so far in ensuring the safe return of those abducted.”

The university appealed to abductors to spare the lives of students and staff abducted.

“Finally, we appeal to those in custody of our staff and students to spare their lives,” the statement added.