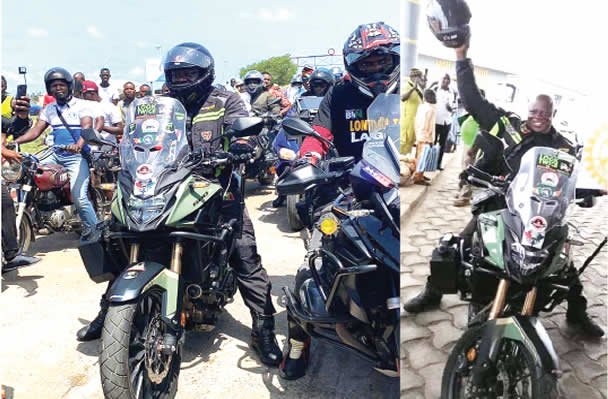 Nigerian adventurer, Kunle Adeyanju, has been commended by billionaire businessman, Bill Gates after he completed a journey from London to Lagos on a bike.

Kunle who named the bike, ‘Eagle’ arrived in Nigeria on May 29 after commencing his 40 days journey from London on April 19.

The founder of Microsoft, Bill Gates, has hailed the Nigerian biker, Kunle Adeyanju, who covered more than 12,000 kilometres (8,000 miles) across 13 countries.

Adeyanju rode a bike from London to Lagos in a campaign to end polio.

The biker, also known as ‘The Lion Heart’, travelled 41 days from London to Lagos on a motorcycle to achieve the feat.

Commending Adeyanju’s feat, Gates, who is among the world’s richest persons, in a tweet on his Twitter handle, described the biker’s campaign as “incredible”.

Gates retweeted a story on the biker and wrote, “Incredible. #lionheart1759.”

Adeyanju embarked on his transcontinental challenge in April to raise funds for Rotary International’s fight against polio.

In an interview with The PUNCH, the biker had said he “started from London to France and to Spain, then I crossed into Morocco and visited Casablanca.

On his motivation, he said, “For me, it’s all about giving back. It’s all about using my skills and lifestyle to touch the lives of the underprivileged. I look at it that every one of us has been blessed.

“Some people may say theirs are not enough but we have all been blessed. So those things you’ve been given, how can you use them to touch the lives of other people?”

Following Bill Gate’s comment, members of the online community took to the section of the post on Twitter, to praise Kunle Adeyanju for putting Nigeria on the world map and getting recognised by Bill Gates.