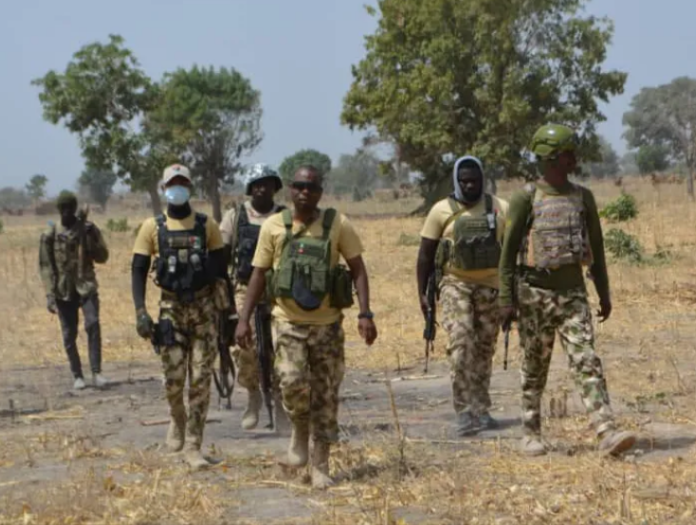 The Defence Headquarters says the troops of Operation Hadin Kai have neutralised 43 terrorists, arrested 20 and rescued 63 kidnapped victims across the North East within three weeks.

The Director, Defence Media Operations, Bernard Onyeuko, a major general, said this on Thursday in Abuja while briefing journalists on the operations of the armed forces between April 28 and May 19.

Mr Onyeuko also said that 1,627 Boko Haram terrorists and their families, comprising 331 Men, 441 women and 855 children, surrendered to the troops at different locations between May 1 and May 14.

Mr Onyeuko said that troops killed Malam Shehu, who was the Amir and spiritual head of the group and some of his foot soldiers during a clearance operation in their enclaves at Jaje, Mango Ali, Dissa, Balangaje.

He said the troops had, on May 14, neutralised Abubakar Sarki, a terrorists’ commander, and his fighters in Sambisa forest at Yuwe in Konduga Local Government Area of the state.

According to him, the troops apprehended Modu Pantami at the outskirt of Benishied Village in Kaga Local Government Area while attempting to transport a large quantity of logistics items to terrorists.

“Other items recovered are one pumping machine, two bandolier belts containing 377 rounds of 7.62mm and 54mm ammunition and one Isuzu vehicle.

“All surrendered Boko Haram Terrorists, recovered items, rescued civilians and captured terrorists have been handed over to appropriate authorities for further actions,” he said.