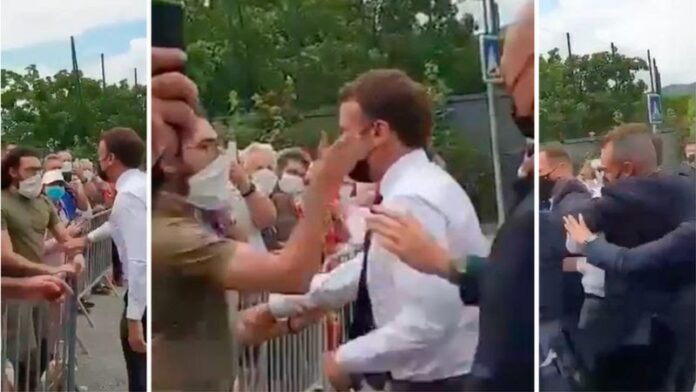 A French court sentenced the 28-year-old man who slapped the president in the face, to four months in prison on Thursday June 10.

Damien Tarel was immediately arrested after the incident which occurred as the French leader was greeting a crowd in the region on Tuesday.

The court in the south-east city of Valence convicted Tarel on Thursday, on a charge of violence against a person invested with public authority. He was given four months in prison and an additional 14-month suspended sentence, and was banned from ever holding public office and from owning weapons for five years.

Tarel described himself as a right-wing or extreme-right “patriot” and member of the gilets jaunes economic protest movement.

After the incident, Tarel acknowledged hitting the president. “When I saw his friendly, lying look, I felt disgust, and I had a violent reaction,” he told the court. “It was an impulsive reaction … I was surprised myself by the violence.”

He said he and his friends had considered bringing an egg or a cream pie to throw at the president, but had dropped the idea – and insisted that the slap wasn’t premeditated.

“I think that Emmanuel Macron represents the decline of our country,” he said, without explaining what he meant.

Macron wouldn’t comment on the trial, but insisted that “nothing justifies violence in a democratic society, never.”

Another man arrested in the ruckus that followed the slap, identified by the prosecutor as Arthur C, will be judged at a later date, in 2022, for illegal possession of weapons.